It is a pleasure to do business with you. I would like to recommend this seller.

Have been working together for more than 2 years very professional.all products works fine in our equipments.Thank you.

Annual spending on optical network (ON) hardware will surpass $17.5 billion by 2018, according to analyst firm Ovum. The popularity of 100-Gbps technology will drive what would amount to a 3.1% compound annual growth rate (CAGR) from 2012, notes Ovum. Increased sales of submarine line terminal equipment (SLTE) also will contribute to the positive momentum. Ovum made the prediction on the heels of what the market research firm described as “an exceptionally strong” second quarter of 2013 (see "Optical hardware sales resume growth says Ovum"), which Ovum analysts believe signals the beginning of a rebound in spending. The quarter was the strongest in the last six and was the seventh highest quarter in the last 10 years, Ovum reports. “Ovum’s 9.1% growth projection for North American ON sales in 2013 signals a solid bounce-back year after two years of non-growth,” says Ian Redpath, analyst, network infrastructure and author of Ovum’s new “ON Forecast Report: 2012–18.” “Network core investments are resuming and 100G is being deployed in volumes,” Redpath continues. “The North American Tier 1 communications service providers (CSPs) and cable operators are investing in their core network to support all traffic types." Elsewhere around the world, Ovum expects spending growth in the Asia-Pacific and South and Central America regions. Ovum anticipates growth in Asia-Pacific ON hardware spending to reach 3.1% this year, with strong growth in China, with help from the ASEAN-5 countries (Indonesia, Malaysia, Philippines, Thailand, and Vietnam) and Australia and New Zealand (ANZ) offsetting projected market declines in Japan and India. South & Central America ON spending is projected to grow by 1.6% this year. The market in this region as surpassed the $1 billion mark, a level that Ovum expects will be maintained. However, Ovum doesn’t expect growth everywhere. The Europe, Middle East, and Africa (EMEA) region will remain in the economic doldrums this year, the market research firm believes. “We expect 2013 ON sales to come in at a dismal negative 9.6% versus the 2012 level,” explains Redpath. “Spending has been down in four of the past five years, and under-investment in the region is becoming more acute. At some point, the CSPs will have to resume buying to make up for this prolonged period of under-spending.” EMEA’s drag on growth means that, overall, ON spending globally should only growth 1.1% in 2013 versus 2012, Ovum predicts. But it’s a place to start. 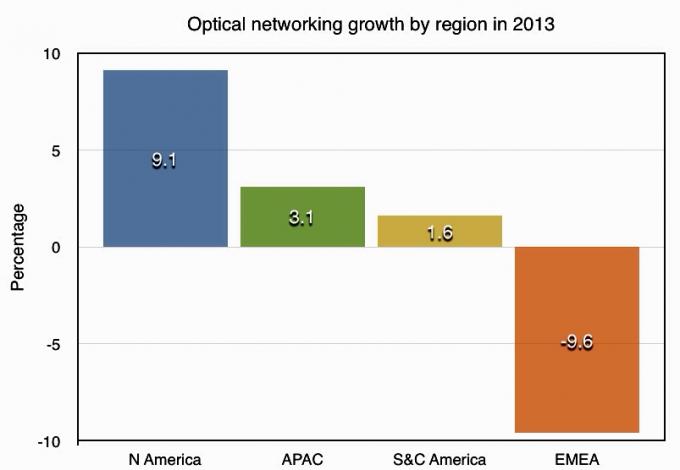 “Ovum’s most likely forecast scenario to 2018 projects strong positive growth in North America. Modest growth is projected for Asia-Pacific as a whole, with strong growth for ASEAN-5 and ANZ, moderate growth for China, and low growth for Japan and India,” Redpath says. “The growth expectations for Europe are a mixed: down in 2013, modestly positive in 2014, and then more vigorous gains for 2015 and beyond.” The popularity of 100G technology will remain strong over the entire forecast period, starting this year. Revenues for 100G system surpassed 40G sales for the first time in 2Q13, growing 233% during the first half of the year compared to the year-ago six months to reach 1 billion. Meanwhile, 40G sales are headed in the opposite direction, shrinking 24% for 1H13 and dropping below $1 billion to $942 million. “Nearly all new large-scale, long-haul optical networks designed and deployed today will be 100G. 100G has assumed the lead position and will not yield within our forecast period,” predicts Redpath. “Two positive market trends are emerging at the same time. The first is a need for the CSPs to refresh network technology after a long period of running core networks hotter and delaying investment. The second major trend is the maturity of 100G technology to the point where CSPs have begun deployments at scale. 100G is in the right spot at the right time.”